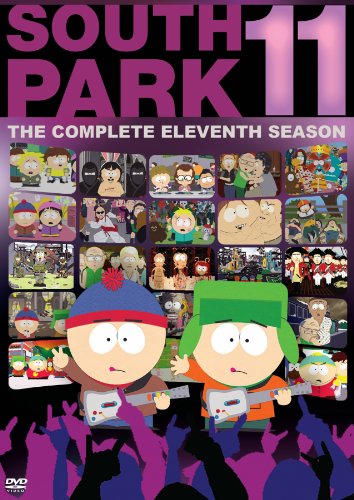 Brand : South Park
from USA
to Kyrgyzstan
in 5-8 days
At your doorstep by Aug 10  to Aug 13 with standard delivery

Note: "There is a running change on the artwork for this item hence the case might have a different cover image but the content remains the SAME." All fourteen uncensored episodes from South Park's eleventh season are now available in this exclusive three-disc collector's set. Join the boys as they attempt to rescue Imaginationland from nuclear annihilation, discover the secret behind the Easter Bunny, and get head lice. For them, it's all part of growing up in South Park! Disc One: - With Apologies To Jesse Jackson - Cartman Sucks - Lice Capades - The Snuke - Fantastic Easter Special Disc Two: - D-Yikes - Night Of The Living Homeless - Le Petit Tourette - More Crap Disc Three: - Imaginationland - Imaginationland, Episode II - Imaginationland, Episode III - Guitar Queer-O - The List .com ---- After 10 seasons of sick, wrong, brilliant, subversive, and groundbreaking humor, South Park just keeps getting a little more sick, a little more wrong, and a lot more funny. What could possibly be left for the boys from the small, redneck mountain town of South Park, Colorado to accomplish? Plenty, as it turns out. Cartman, for example, fights a midget in the season opener, pulls a practical joke that gets poor Butters sent to a special camp for gay children, sets a new town record for the most number of homeless people jumped over on his skateboard, and fakes having Tourette's syndrome in order to get away with saying whatever he wants at school. Stan gets pulled into a bizarre and hilarious conspiracy surrounding Easter in a plot that parallels The Da Vinci Code, and Kyle becomes a Guitar Hero, only to lose his best friend to the glittering lights of rock stardom. Clearly the brightest star in this season, though, is the two-part episode Imaginationland, where the boys have the entire contents of the world's imaginations, religions, and superstitions, laid before them for better, and for worse. It's a brilliant episode that encapsulates everything that continues to make South Park so strong: imaginative story lines; sharp animation; indelible characters thrust into ridiculous situations; and all of it tied together with a strong ekimthread of subversive humor. It's a formula that results in the sort of TV that just won't be seen elsewhere, and considering that one whole story line revolves around a plot where Randy Marsh (Kyle's Dad) tries to outdo Bono (lead singer of U2) for the record of World's Largest... umm, Stool, well, maybe that's a good thing. But for fans of the show who can't get enough of goin' down to South Park to see some friends of theirs, season 11 will continue to give plenty of reasons for making the trip. --Daniel Vancini
Show More
Reviews

Disclaimer: The price shown above includes all applicable taxes and fees. The information provided above is for reference purposes only. Products may go out of stock and delivery estimates may change at any time. Desertcart does not validate any claims made in the product descriptions above. For additional information, please contact the manufacturer or desertcart customer service. While desertcart makes reasonable efforts to only show products available in your country, some items may be cancelled if they are prohibited for import in Kyrgyzstan. For more details, please visit our Support Page.